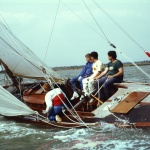 Probably like nothing else you’ve ever sailed.  Although she’s over 43 feet long she only weighs a bit over three tons.  There isn’t a lot of sail, on the face of it, but in wind of force 3-4 she easily gets up to 5-7 knots on a reach, and will go to windward at 6 knots without apparent effort.

Off the wind we carry a big asymmetric spinnaker, originally made for a catamaran, and under spinnaker and mainsail we’ve recorded 10 knots on a broad reach for extended periods (the log won’t read over 10 knots).

The key thing is that she’s very light, and there’s really not a lot of sail, so everything is easy to handle.  “It’s a bit like steering a really big dinghy” one of our guests said last year.

The key thing about sailing a 30 is to have the right amount of sail up, and to keep the boat balanced.  There are three reefs in the mainsail, and we carry three head-sails, varying from a #1 genoa with an enormous overlap (mostly for racing), down to a #3 jib with no overlap.  Anything much beyond force 5 needs a reefed mainsail and a smaller foresail.